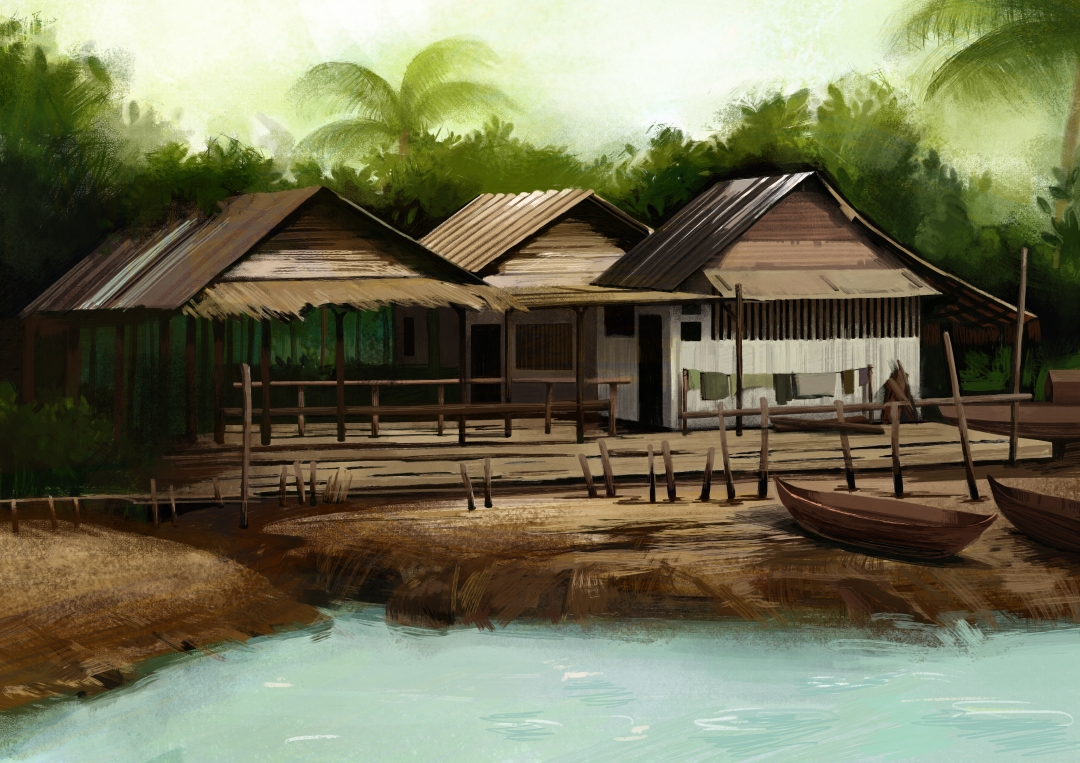 My father Simon Seah was born in 1946, at Lorong Low Koon in Aukang, in north-east Singapore. He also lived at Jalan Payoh Lai, Jalan Lye Kwee, and Lorong Buangkok for three decades, before he moved out of Aukang in 1975.

Yet, Aukang used to be an area heavily influenced by Teochews, and had many Catholics.

That is why My Father’s Kampung highlights the unique and distinct identity of the Catholic Teochews who lived there. For example, my father, his family, and his friends and neighbours attended Montfort School; worshipped at the Church of the Nativity; and spoke Teochew.

While I focus on the Teochew Catholics, I have also included stories on Eurasians, Malays, Indians, Hokkien Babas, and other communities who made up the multi-ethnic composition of Aukang.

For example, there was a sizeable Eurasian community residing between Yio Chu Kang Road and the fifth milestone Upper Serangoon. One place where they interacted frequently with Teochews was the popular Simon Road Market, at the sixth milestone. Incidentally, Simon Road was named after Simon Aroozoo (1849–1931), a Eurasian who had inherited the land from wealthy estate owner Gan Eng Seng (1844–1899).

My Father’s Kampung contains such local stories, and much more. The book is supported by the National Heritage Board, with Forewords by Baba Robert Yeo and the Montfort Alumni.

The lively interviews with prominent Teochews of the area and the apt photos and illustrations all add up to a comprehensive and intriguing tale.“

Excerpt of Foreword from
Poet, playwright, and author, Robert Yeo

A valued partner, Montfort Alumni shares the aim of striving to pass on the rich heritage of Montfort, from generation to generation. Montfort School served as the historic education hub for the surrounding community, empowering poor villages, especially those from poor families, with education, faith, and values.

“The Montfort Alumni is proud to support this book by Shawn Seah which documents the long and distinguished history of Montfort School.”

Excerpt of Foreword from Montfort Alumni

The book is rich in personal stories and oral histories of those who lived in the north-east part of Singapore from the 1940s to 1970s, and has accompanying illustrations, and photos.

The book also helps make history relevant, by showing the links between past and present.

“Finally, he has cleverly linked the old Aukang, which comprised the fifth and sixth mile precincts, and Kangkar and Punggol, to the new, enormous developments that is now Sengkang and other districts. In this way, he has provided continuous engagement between the OLD that his father knew with the transformed, beyond recognition—NEW.“

These images represent the links between past and present, between Aukang and Kangkar then, and Hougang today. But is Hougang today the same as Aukang back then? And do these two locations share the exact, same boundaries?

This book has been launched online on 19 September 2020, and is available online at World Scientific’s website and major bookstores.

Please lend your support by visiting this page My Father’s Kampung or by visiting your nearest major bookstore. Thank you very much for your kind support.

The contributions of (almost literally!) an entire kampung made this book possible.

I am deeply grateful to these kind, generous, and encouraging people.

First, I have to thank my family: Daddy, Mummy, Uncle William, and Aunty Florence.

Third, thank you, Khoo Yee-Hong and Sylvia Koh, and the kind people at World Scientific.

Fourth, I have to thank my mentors and teachers in my writing journey: Robert Yeo and Dr John Kwok.

Sixth, I would like to thank the Singapore Seah Clan Association for their support, especially Jeremy Seah Han Chong.

I am also thankful for the support from the National Heritage Board.

And above all, I am very grateful for community support. Without it, there can be no sustainable arts, culture, and heritage.